A £200m floating wind farm project is being established off the North East Coast of Scotland. The turbines are manufactured by a Norwegian company Statoil, and need to be towed across the North Sea to the Hywind site. Two turbines were in situ at the end of June 2017, awaiting the arrival of five more. Interestingly, Statoil the company responsible for the research and development of this new technology are an oil firm looking to move away from carbon-based fuels.The World's FirstThis will be the world’s first floating wind farm. The project has not only opened new doors to generating renewable power, but also created a wave of excitement amongst renewable enthusiasts. 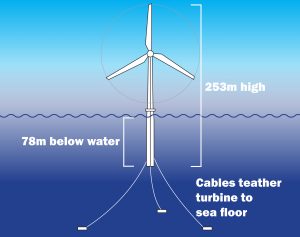 Click to enlarge imageSo what stops the floating turbines from floating away and being propelled on a round the world cruise?  The turbines use a 78-metre-tall underwater ballast and three mooring lines that will be attached to the seabed to keep them steady and upright. Irene Rummelhoff, head of the oil firm’s low-carbon division, said “It’s almost unlimited. Currently we are saying [floating windfarms will work in] water depths of between 100 and 700 metres, but I think we can go deeper than that. It opens up ocean that was unavailable,” she said. “If you look at coastlines around the world, there’s few that have sufficient area at depths down to 40 metres like the North Sea, so if they want to deploy offshore wind, they need to introduce floating wind,” said Rummelhoff. Should the results of this ground-breaking work prove fruitful, the possibility of floating wind farms over taking fixed is very real.